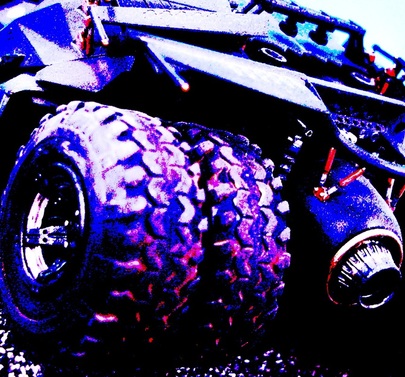 TSF Rating: * * * * *
"What, the Tumbler...?  Awww, you wouldn't be interested in that!"
In anticipation I clapped my sweaty palms together then wiped the drool from my chin.  I had just snatched the package from a weary courier driver and now it sat before me on the coffee table begging to be purged.  My fingers eagerly fumbled and tore at the packaging tape around the carton until I was able to release the entombed quarry.
And there it was.

Pause.  Breathe.  Take in the box art.  Not bad, - lots of pics of the completed kit.  Close-ups.  Mmmm…detail!
The next life-changing decision: to be opened or not to be opened?  The passionate modeller will understand that just like "paper" wins over "rock", sooner rules over later!  So with little hesitation, and pushing aside that shadow of guilt cast by all those other unfinished projects on the bench, I made light work of the cello wrap and lifted the lid….

From the depths of writer/director Christopher Nolan’s imagination comes the latest incarnation in a long line of batmobiles.  Affectionately dubbed the Tumbler it features in the latest Batman movie franchise (Batman Begins and sequel The Dark Knight).  The moment I saw the Tumbler in action on the big screen I knew I had to have one, if not life-size, then at least a scale model of it for my shelf.  I only hoped that this vehicle would be popular enough for a kitset manufacturer to produce.
A little research on the internet revealed my prayers had been answered.  Bandai had stepped up to the challenge (and paid the huge royalties no doubt!) to create a 1:35 scale replica of this unusual humvee-come-lambourghini design.

Weeks later and I had one.

Overall it was a great wee kit to put together.  The angular stealth-like panels built up like a 3D puzzle over the cabin box frame, and fitted so snugly that it could have been a snap-fit kit.  The detail was crisp and mostly unflawed.  And A+ marks to Bandai for accuracy.  (I spent many hours of research watching the movie on DVD, thumb hovering over the pause button, and couldn’t fault this kit).  The only additions I made were some fine windscreen washer feed tubes to the wipers, hydraulic feed tubes to the rear shocks, and some extra lines and rods down the front wheel arms to the brakes and steering mechanisms of the ingenious axle-less front wheels.  My only criticisms would be that it would have been great to see the Tumbler in a larger scale, and the option to have the canopy open with a fully kitted interior to show off.*
Of course, the Tumbler would be finished in standard Bat black with a few metallic highlights.  Not much of a spectacle on display so I felt I needed a point of difference.  CLICK HERE to find out what I did...

*Update: February 2011. It would appear that our mass prayers for a larger scaled Tumbler have been answered, as Moebius Models have tentatively announced an upcoming release of a 1/25 scale Tumbler!  Oh, oh, oh, AND with a fully detailed interior!!  Credit card, prepare thyself for a whipping!!! 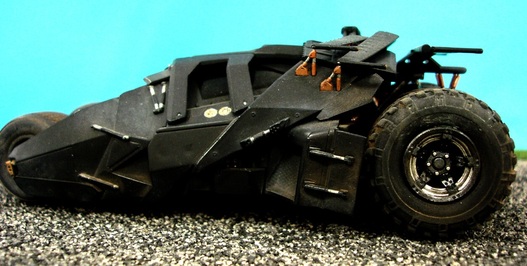 Yep, a tough looking machine alright. Definitely a lamborghini on steroids! This pic clearly shows two dimples or sinkholes in the facing flank. I would recommend filling these with putty if you find them before you start painting! 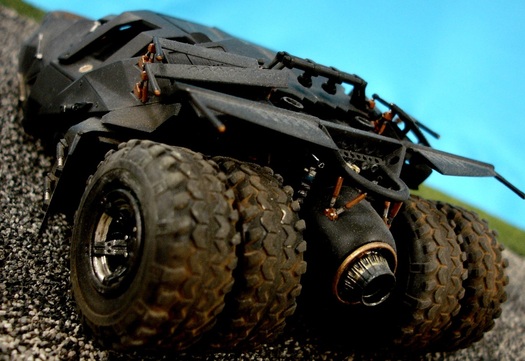 Another embellishment I made was to add a gold/copper 'ring' made from strip styrene around the jet exhaust housing. The pics on the box appeared to show this detail but the kit definitely didn't have it. Just a flattened rim and nothing else. 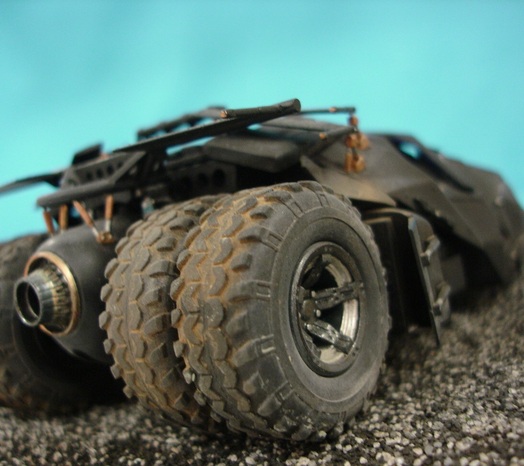 One of the nice touches from Bandai are the solid rubber tyres, but would also have been a nice touch if they free-wheeled, instead of being glued to static pins. 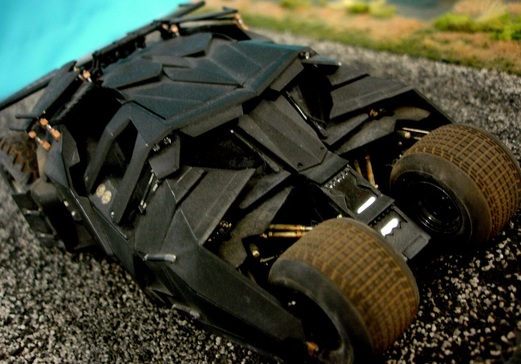 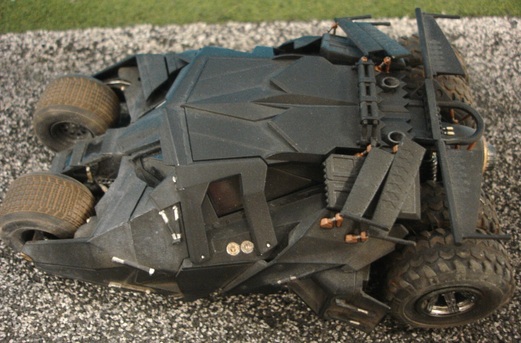 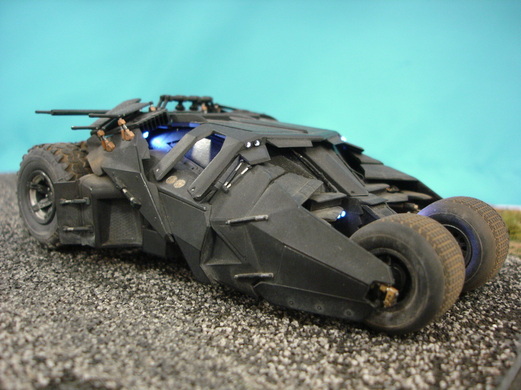 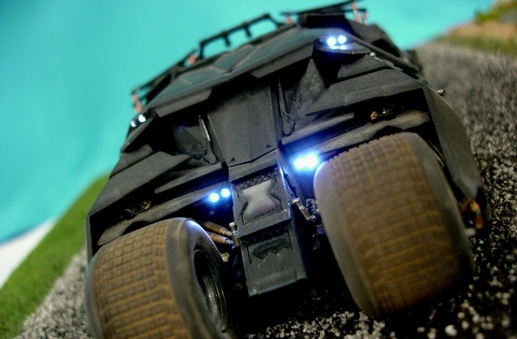 The high-mounted headlights at upper left of pic are actually faulty. I had plenty of trouble with this pair of 1mm fibre optics and this is the second pair I have installed. In the process of coiling the fibres into the confines of the cabin I managed fracture (not break) them both, resulting in a diffused light coming off the end. 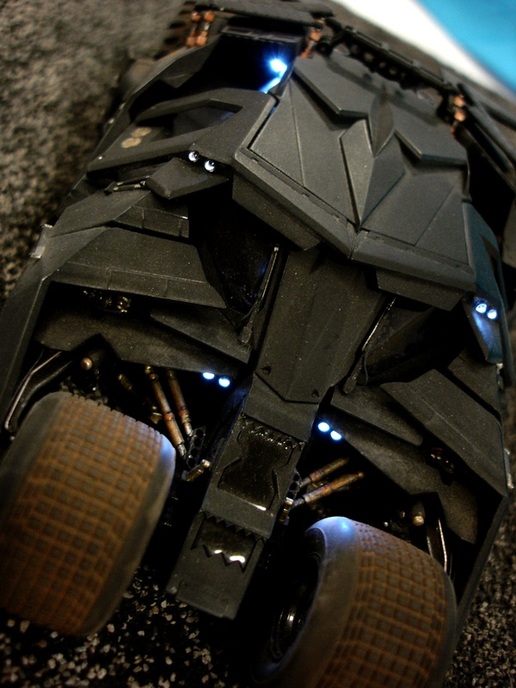 Here, you can sort of see the assortment of rods and lines running down the wheel support arms. And also the fine, and fiddly, windscreen washer feed tubes on the wipers. 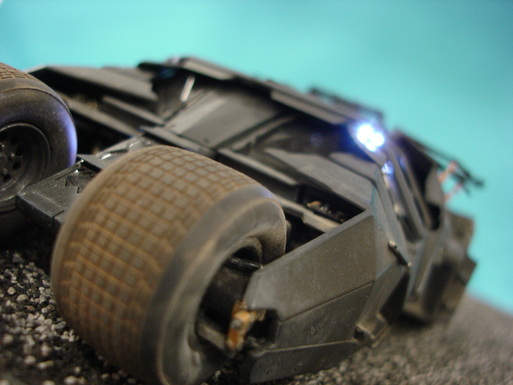 Click on this image to go to the tell-all exclusive about lighting this bad-boy! 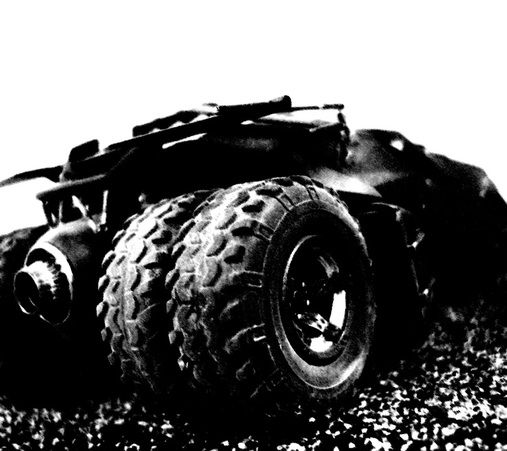 'It's not who you are underneath, - it's what you do that defines you.'
All images property of The Starship Factory 2010.