As soon as I saw the Tumbler in the movie Batman Begins I knew I had to have one.  A real one, of course!  But my dear wife succinctly declared "NO" to that fancy.
So instead I set about finding a new, more accommodating wife...

But seriously now, I was ecstatic when I found out that Bandai had released a model of this cool humvee/lambourghini styled batmobile.  And what a fantastic wee kit it is!  I was gob-smacked by the ultra crisp detail, and the overall accuracy of this 1/35 scaled replica.  Well done, Bandai!!  I can't wait to get started!
"Does it come in black?" Pretty much all of it, except for a few bronze/copper and silver metal details.  I felt that this project would need a point of difference...

So I decided to light it up.

Given the small scale of this kit I figured fibre optics were the only option to light the four pairs of headlights and two auxiliary lamps. I used 1mm optics but this was a mistake.  I should have used 0.8mm strands as a) they would have been more in keeping with the scale, and b) they would have been a lot easier to squeeze into the confines of the "cabin" box.  However I did not find my stash of 0.8mm optics until after this kit was finished.  Will be better organised next time, ha, ha!
Firstly I carefully drilled out the molded headlights then threaded the measured and precut lengths of optics through said holes.  Using a candle flame I very carefully melted the (outside) tip of each strand to form a kind of lens, then with a tiny drop of superglue behind the lens I pulled it flush against its mounting point.  There was  lots of messing about with tweezers trying to grip and then flex the strands into place. 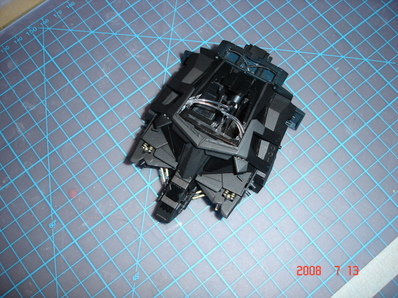 Tricky surgery was required for the top lights.  The auxiliary lamps mounted on the rear firewall required considerable effort to get right.  Fibre optics had to be looped tightly in the cavity behind the firewall, then through the wall into the cabin where they had to do a 360 degree loop to the light source, which I had mounted inside against the firewall, facing forward.  Make sense?  The other high mounted forward headlights were tough as well, due to the lack of room to conceal the strands as they journeyed from the mount points to inside the cabin.  I carefully cut two channels in the top of the cabin box to accommodate the strands so the roof would fit flush on top.  These strands were barely concealed and viewing the finished model at some angles you can see them briefly.
The lower headlights were easy, - the optics going straight from the light source through to the forward bulkhead. 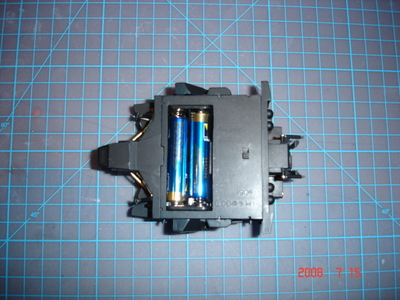 The 2 x AAA battery housing fitted very snugly underneath the Tumbler.  Didn't even have to move the seats back!  And (for a change) I was quite pleased at the lack of detail on the underside.  Would have been sad to butcher it to make holes for switch and batteries!

Photos of the completed Tumbler will be uploaded shortly.  Check back for updates.