"Welcome Aboard" diorama
(Scene from Doctor Who Episode 3.1: Smith And Jones) 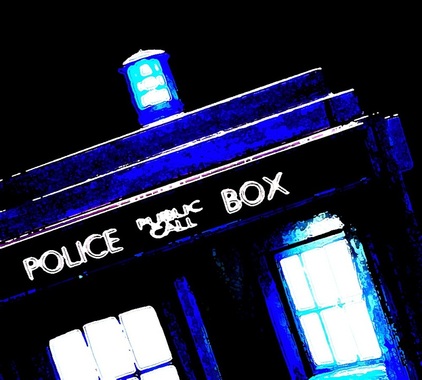 TSF Rating: * * * * *
"It's bigger on the inside!"  The Tardis is indisputably the most globally recognised "spaceship" ever to appear on television. Generations of fans have lovingly followed the Doctor's adventures through time and space over so many decades.
After a long reprieve Doctor Who has been reinvented (or is that regenerated?) for a new audience, along with most of the old foes, - and a few new ones thrown in as well.  Not to mention a whole new bevy of sidekick/love interests queued up, ready to enter the "phone box".
I am one of those long time (older) fans of Doctor Who (Tom Baker being my favourite incarnate), and I always wanted a Tardis in my collection.  So it was with bittersweet excitement that I learned Airfix had released a kit.  Bittersweet because my hazy memories of Airfix kits were not too favourable.  But still, it IS the Tardis after all!
When I finally got my hands on this kit I was pleasantly surprised by what a great job Airfix had actually done.  The detail was amazing, especially in the figures, and I could tell, even in its dark blue shiny plasic form, that the phone box was going to look fantastic.
When I began this build I was wanting something I could put together quickly and finish for our club's upcoming annual competition.  But, just as the actual Tardis is bigger on the inside, so too this project would turn out to be! 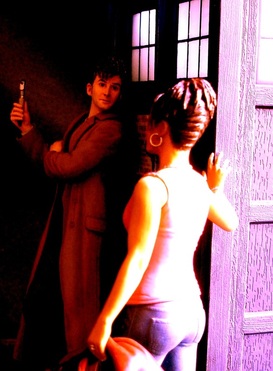 Keeping in mind that I wanted to make this scene look as authentic as possible I had no choice but to light the Tardis' windows.  Logistically this would prove to be quite a challenge especially when it came to the final stages of assembly.  I would advise anyone who wanted to light their Tardis the same way to fix the LEDs and wiring to each wall BEFORE glueing them together.  I thought that by leaving just the front wall detached I would have enough room to get my hands (and tools) in to run the wires and secure the LEDs in place.  This was not the case! 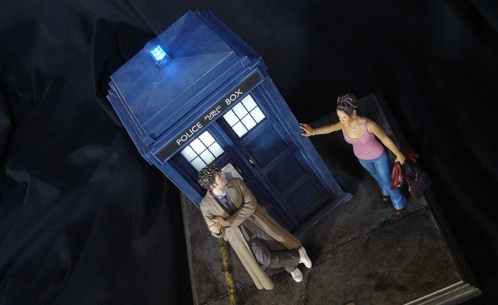 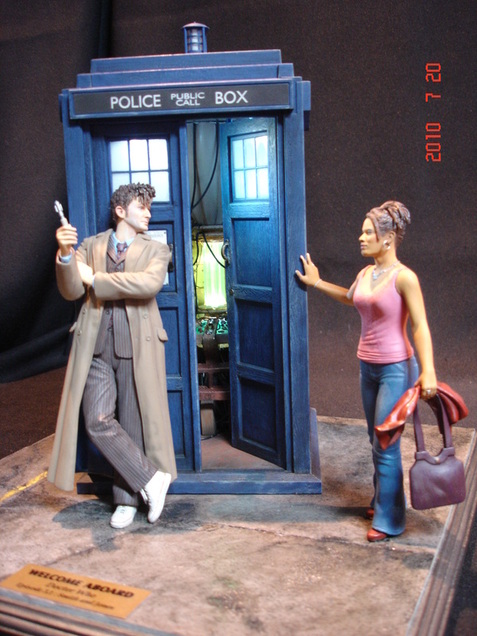 I scratchbuilt a base using Das, rolled out, textured, then painted to simulate the damp London back alley slabs. 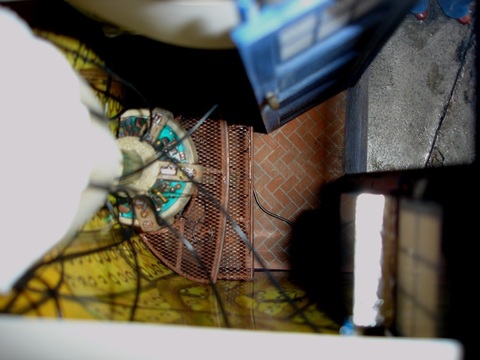 Here's what you see with the lid off. Bending and fitting the supplied cardboard backdrop was difficult. The steps around the console needed a little shave in order to fit inside, probably due to the added bulk of the concealed wires and LEDs. 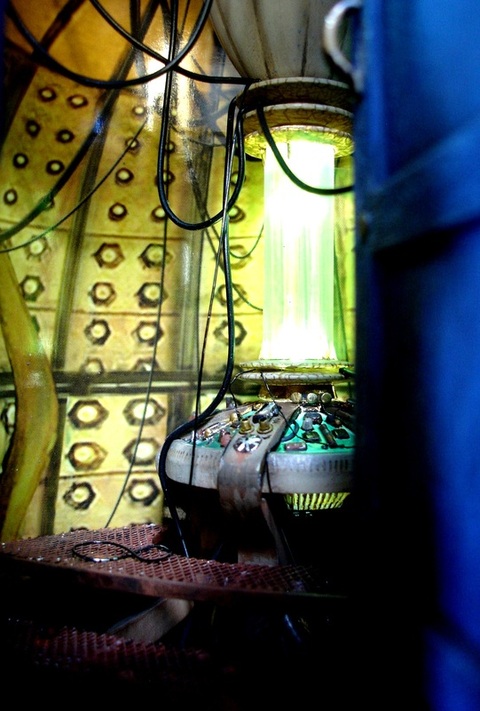 Here and in the previous shot you can see I cut out the molded steps (leaving the 'frame' intact) and inserted aluminium expanded mesh. Given the old rust treatment it looks the part! Also added more greeblies to the console, and draped plenty of 'spaghetti' around. 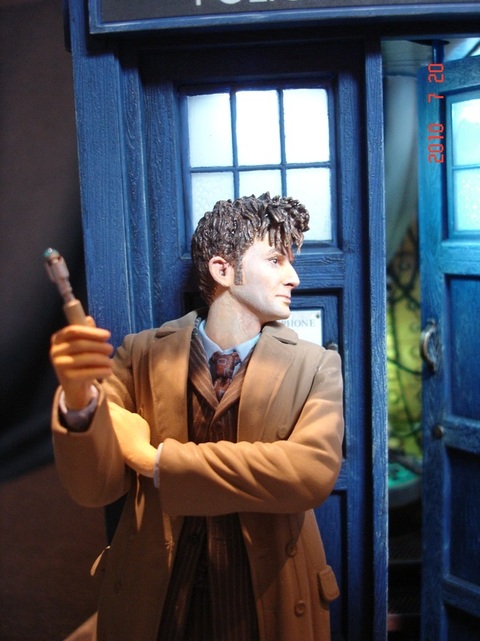 What can I say? The figures were VERY involved, especially the Doctor, with his multiple layers of 'trendy' clothing. 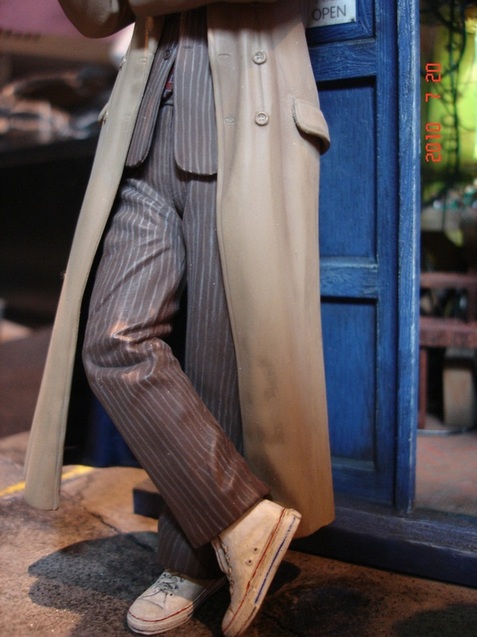 Hmmm... pants look a bit shiny in this shot. Oh, the fun I had with pinstriping! Nearly had to dust off the straight-jacket before I finished them trousers!! (Click on this image if you would like to read an article I penned regarding pinstriping.) 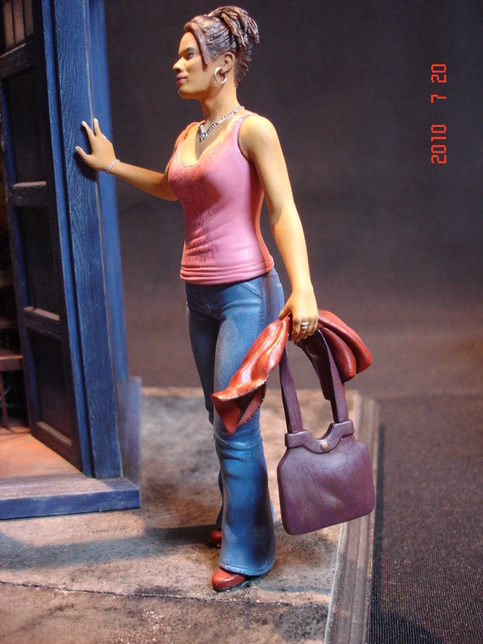 The only thing I enjoyed more than weathering the Tardis? Those denim jeans! 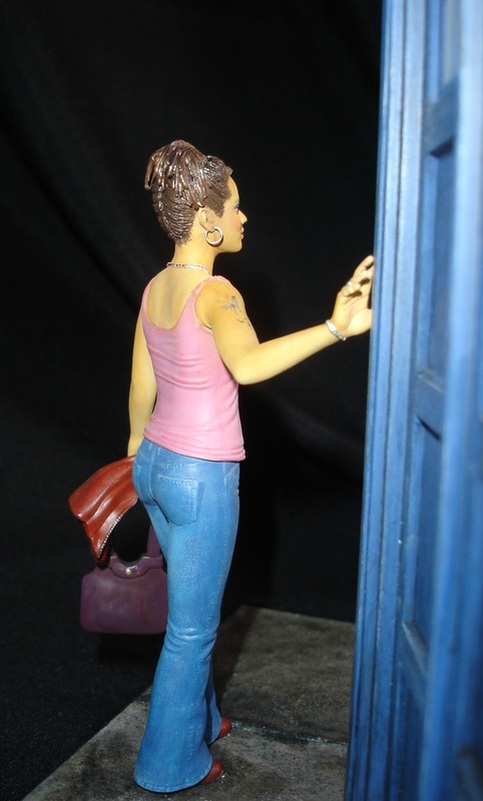 Instead of the plastic hoop earrings supplied in the box I fashioned a new pair from 0.75mm jeweller's wire. It was a bit fiddly fitting them, but at least I didn't have to paint them. 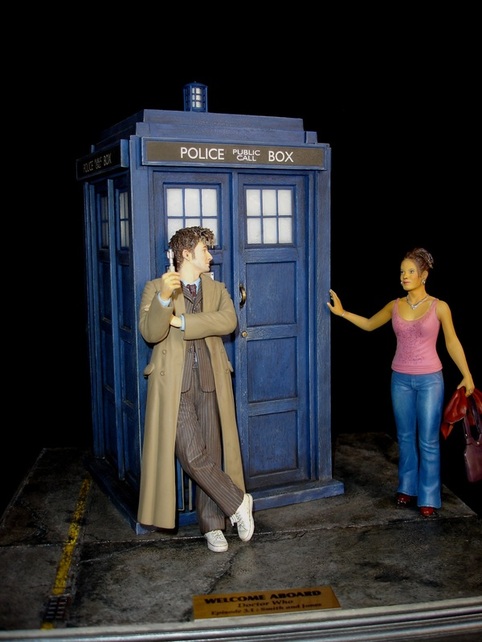 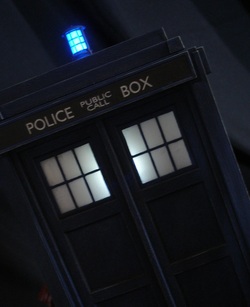 Cool thing about this kit is it does make the 'VROOOP, VROOOP' sound when you shut the door! (...such a geek!!)
All images property of The Starship Factory 2010.