One Mother of a Repair to Rule Them ALL!

This incredible SideShow / Weta polystone sculpture is a behemoth, and massively heavy to boot!  However powerful he may look though Sauron has certainly seen better days.  He must truly be a warrior of the battlefield as this is the third time I have been graced by his dark presence.  The last time was to repair two or three of those helmut spires after his head took a tumble due to a strong gust of wind blasting through an open door!  Can't recall the reason for the similar but more substantial damage this time but it is frustrating having to deal to the same area twice.  Never mind, onwards we go...
​It has crossed my mind that while in my possession this time I should "future-proof" Sauron to guard against any further accidents.  Best solution would be to return it to it's carefully crafted styrene tomb, box it up and hide it in the attic for EVER!  But since that is not my choice to make we will have to look at more inventive and technical solutions...
Since the head sits very loosely (and to be honest - a bit poorly) on top of a rebated collar I considered various semi-permanent attachment options, the reason for which will I will get to in due course.  The obvious and easiest solution would be to supply the owner with a blob of Blu-Tack to use at his own discretion, but I'm thinking a less "tacky" (yeah, I did!) - more sophisticated - option would be to try giving some small magnets a go.  I recently found some tiny neodymium magnets in the jewellery section of our local hobby store and I've been dying to try them out.  Will be posting details of this operation in the near future (all going well).
The second photo shows Sauron's little pinky under reconstruction after the end was knocked off by the falling head during the last catastrophic event.  After drilling down the finger I superglued a wire pin in place, to offer a foundation for the sculpting of a new fingertip, since the original had completely vanished back to whatever realm of Middle Earth it called home!  Again, more details to come.  It all takes time! 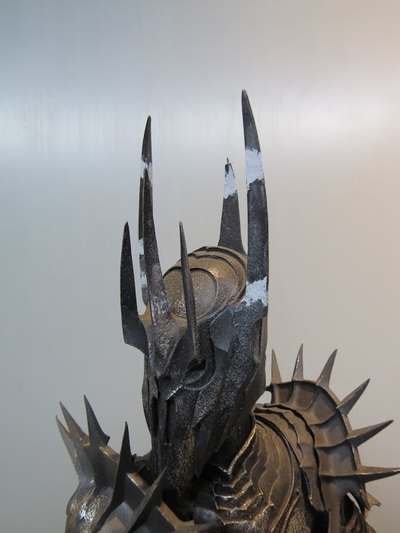 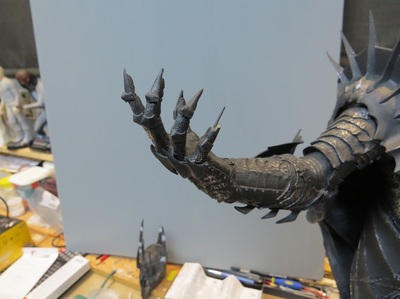 The saga will continue.  Stay tuned!