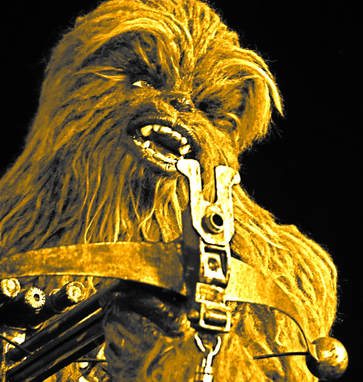 Another great kit of another great subject!  And it's BIG!!  So big, in fact, that Screamin' obviously had difficulty squeezing him into the box. Given the shocking state of his ungainly legs when I first opened the box it's a sheer miracle I even got them untwisted and reset to a respectably balanced position.  Boiling water, cold water, hairdryer, cold water, swearing, repeating...!
So if you are a Screamin' aficionado you'll already notice something different about this build.  Yes, he is woolier than other versions you've likely seen.  While the detail and likeness were very good, and painted up he looked just like the box art, you couldn't escape the fact that this Chewbacca was cast in vinyl and just looked plastic.  Plus the massive seam where torso meets legs was diabolical, and would have needed a bucket of filler to camouflage.  So I set about the formidable task of fuzzing up the wookiee. 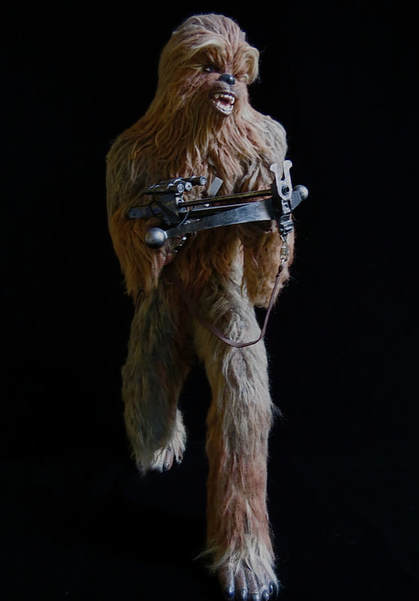 Even though he has large broad feet to stand on he has always remained precariously balanced. I suspect this is to do with the gait and distance between them, as well as the amount of plaster I used to give him weight. Originally thinking "the more the merrier" I now believe it would have been better to only partially fill his legs, maybe just past the knees. This would have kept the centre of balance lower. 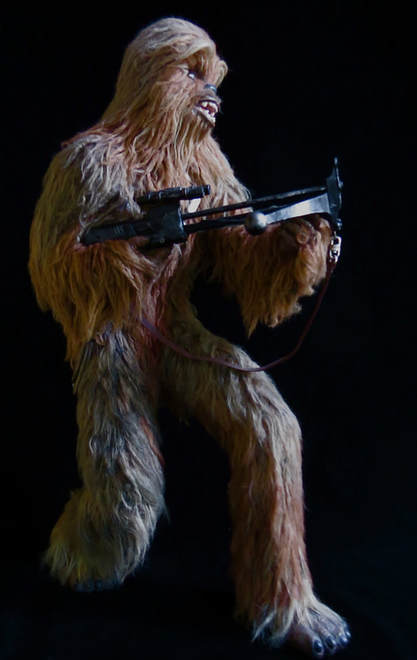 The real battle begins! Now I'm not painting myself a hero or superhuman modeller, but the task of getting the fur on him was more than a little "chewy", and required more dedication and perseverance than I am normally known to have! First job after acquiring a slab of faux fur (with the deepest pile I could find) was to get it to three shades of wookiee. 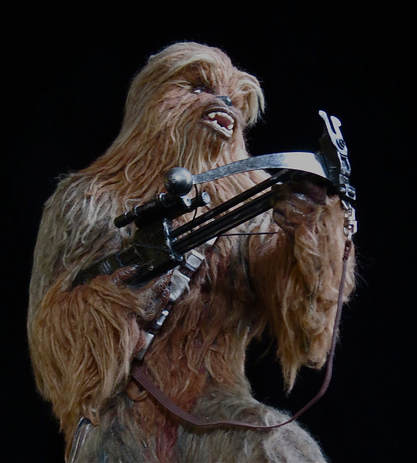 With a colossal amount of salt added to the dye pots to act as a mordent I dyed two portions of fabric, one in a solution of tea leaves and the other in a seriously chewy brew of coffee. A third (small) portion of the fabric I bleached blonde to use at the extremities of Chewie's coat, i.e. ankles, wrists, and a little around the face and eyebrows. 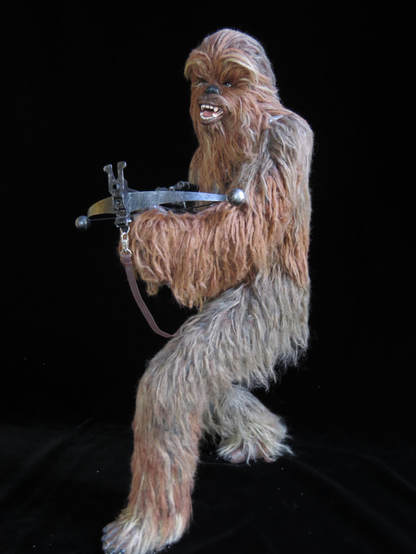 Using a watered down solution of PVA glue as the fixative, I would twill one pinch of fur at a time, cut it from the fabric and dip the cut end in the glue. Beginning at the ankle of one leg I slowly and methodically worked my way up the limb, paying attention to where his fur morphs from one colour to another and back, pressing each tuft in place. Spiraling around as I moved upward effectively camouflaged the glued "roots" of the previous circuit. 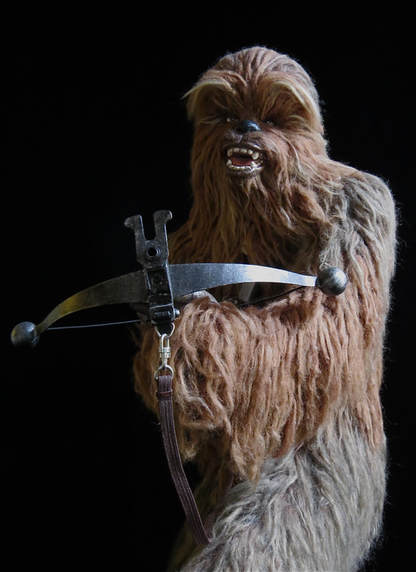 By the time I got to the top of the first leg I had had enough! It had taken several excruciating hours over the course of two evenings to get that far! I truly didn't think I could carry on but I didn't want to give up and destroy what I had achieved at that point. I believe it was a day or so later, and after my loving and supportive wife proclaimed how good Chewie was beginning to look, that I decided to "suck it up" and press on. Once the second leg was done I realised the worst and most tedious part was likely over. He was really starting to look "wookiee-ish" now, and the rewarding thought of getting to the fun part - his head - spurred me on up the torso, covering his arms, front and back. 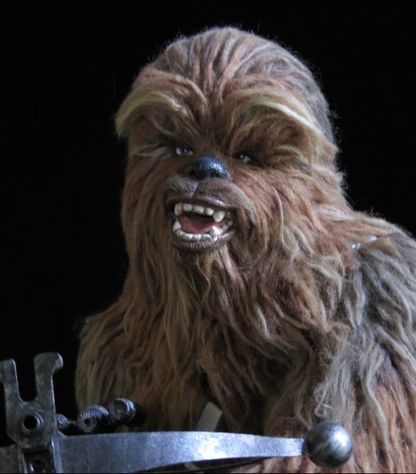 Even with this "softly focussed" photo you can easily make out the individually twilled and glued tufts of fur. Although a little tricky working around the eyes, mouth and nose it was easier than anticipated. I had a lot of fun working on his face, and amusingly discovered that styling the hair in various ways would give Chewie remarkably different personalities. As you will note I finally settled on his "Empire" look, with the abundantly arched and flowing eyebrows.
All images property of The Starship Factory 2017.