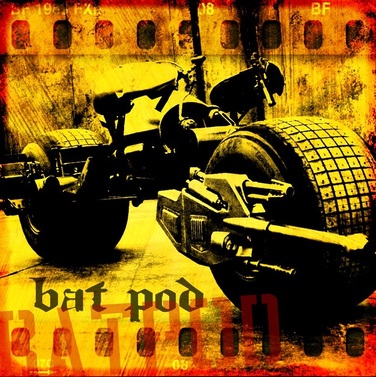 TSF Rating: * * * *
The quirky little Bat-pod started out as one of those quick-fire wee projects that slowly manifested itself into a troublesome behemoth!  This speaks volumes more about the modeller than the kitset itself which, in all honesty was a pretty crisp product from our friends at Moebius Models.  The detail and accuracy was sharp and consistent with Moebius' high standard, and as you would expect from a new mold there was little-to-no clean-up required throughout the assembly.  However, speaking of assembly, there were a couple of minor issues that arose...

Now I don't know if it was my sometimes questionable modelling skills or a misshapen part out of the box, but upon inspection of a freshly assembled main chassis I found it to be a little "twisted" or bent.  This became most apparent when I test-fitted those beautiful big tires and they clearly didn't line up!  After some gentle persuasion and re-gluing I managed to get her back to an almost respectable alignment!
Another issue I recall was I didn't like the fit of the vinyl tires on the rims.  If you have yet to build this kit yourself I highly recommend that you remove those "ribs" that span the width of the wheel rims. Or at least whittle them down until they are almost non-existent.  I found that these "ribs" scarred the soft vinyl of the tires as I pried them on, leaving an undesirable pattern of little notches around the inner circumferences.  A little lubricant applied to both the tire and rim could cure this problem,  but be warned,- they are a tight fit so damage to the vinyl may still occur.  Perhaps this trick could have been mentioned as a "handy tip" on the instruction sheet,- surely a nice touch from our friendly manufacturers *hint, hint*!

Sanity: Questionable...
I did say that this kit began as a beautiful and simple affair, and for this I am truly grateful to Moebius Models.  They did such a fine job!  But that didn't stop me from screwing it all up with my brilliant ideas!  Because this Bat-subject is endearingly quaint and small I felt (again!) that it needed a point of difference, and behold,- this is where the aforementioned "troublesome behemoth" comes to life!  So, as per my usual M.O. I decided to add lighting to this model, along with a couple of other small details.  And the fun began... 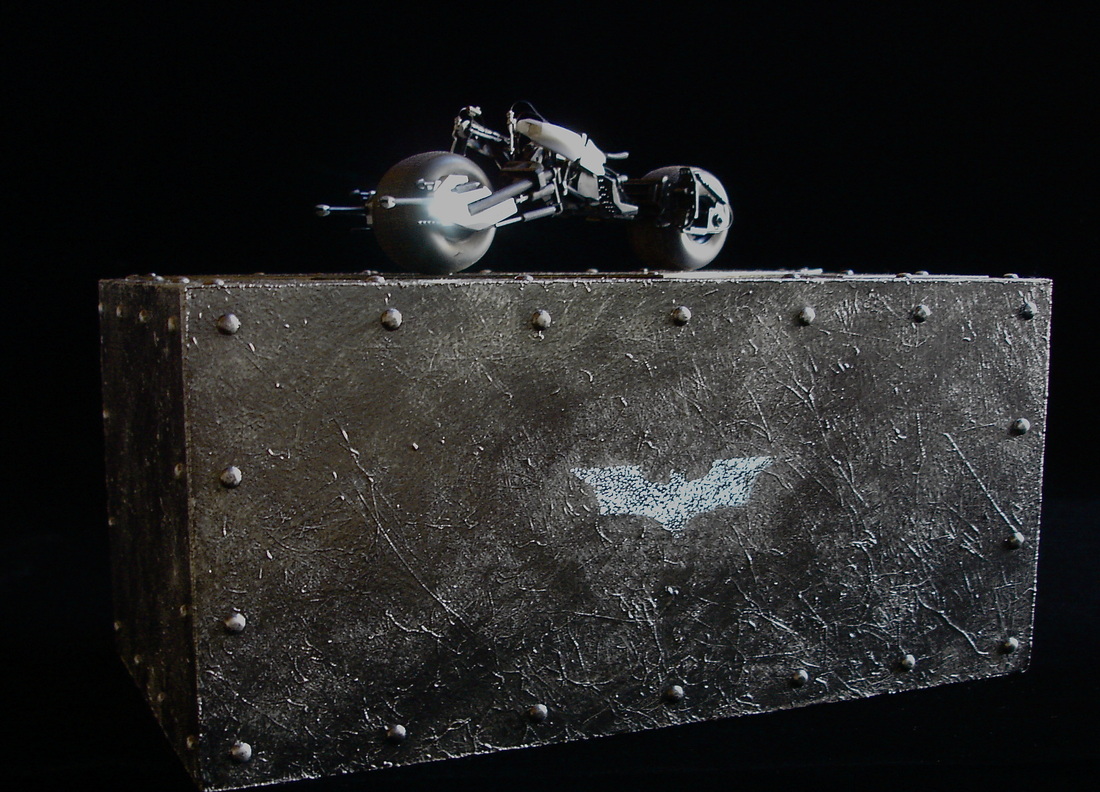 ANSWER TO YOUR FIRST QUESTION: Yes, it is a wooden tissue box! The kind you would find at your local homeware and hobbycraft shop. The textured surface was created by glueing a layer of "cobweb" paper (also available from your local hobbycraft store) over it. Then studded with small split pins (again, from the hobby store!), and finished with a solid coat of gun metal, highlighted with dry-brushed metallic silver. 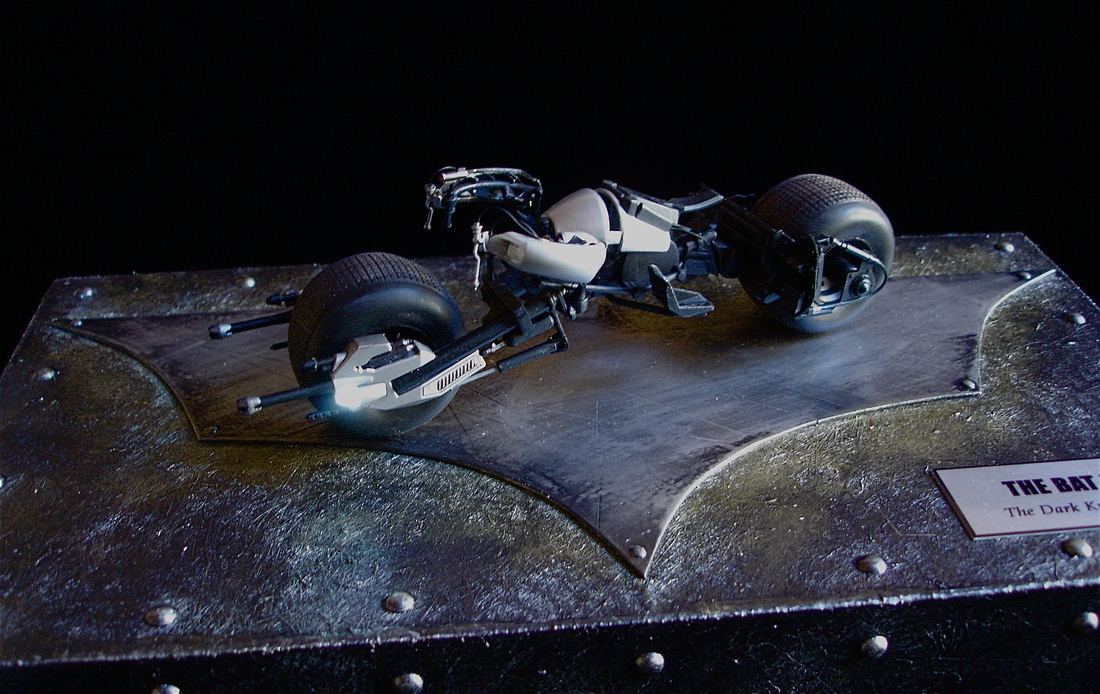 ANSWER TO YOUR SECOND QUESTION: Yes, I am insane! But I did manage to light her up. Am not going to bore you with details, but I will say that this task alone was no small feat, and at times did render me incapable of decent social dialogue, illicit many obscene utterances, and drive me in the general direction of the edge of sanity!! 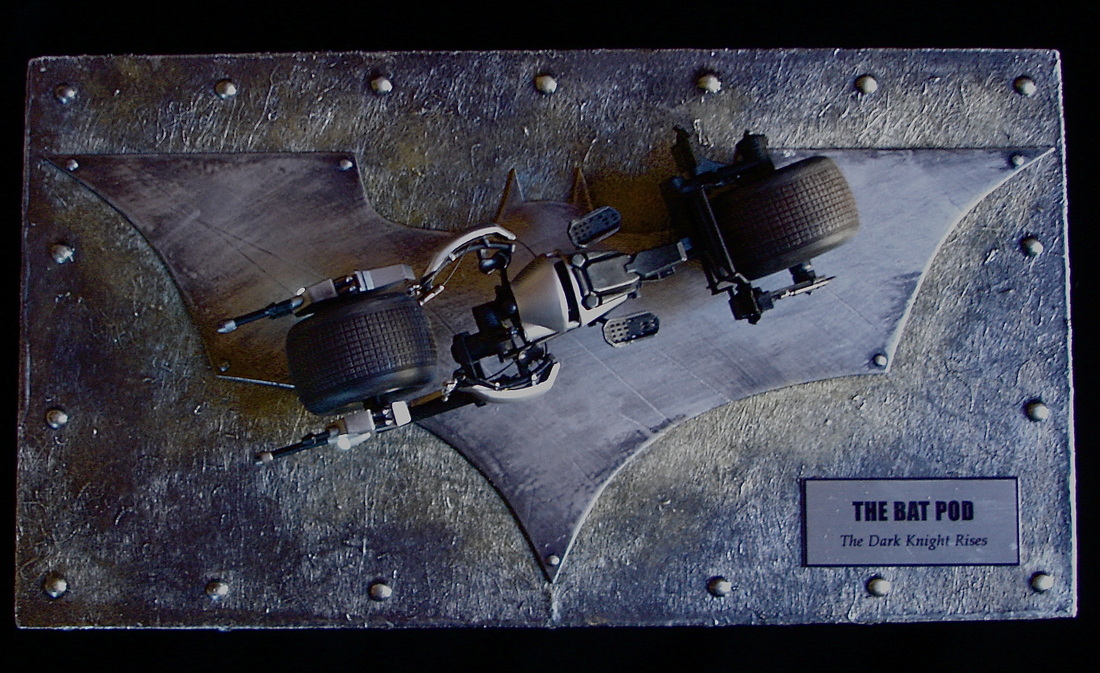 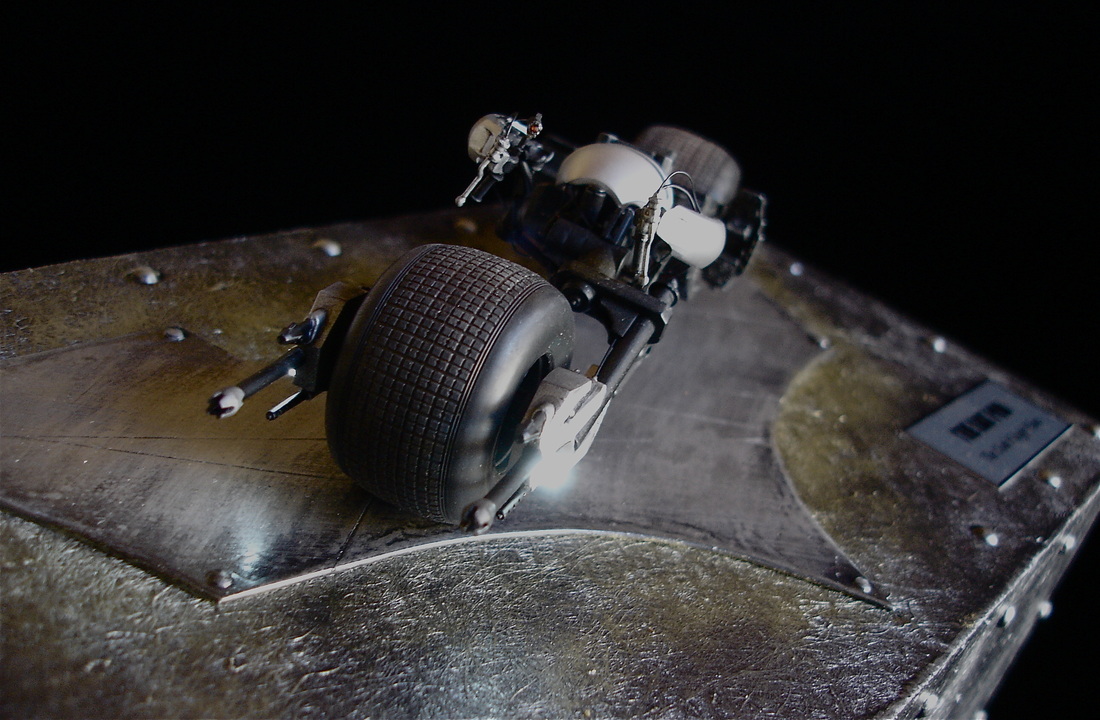 Nobody would blame you if you missed the subtle wee orange light emanating from the scratchbuilt "scope" mounted on the handlebar! 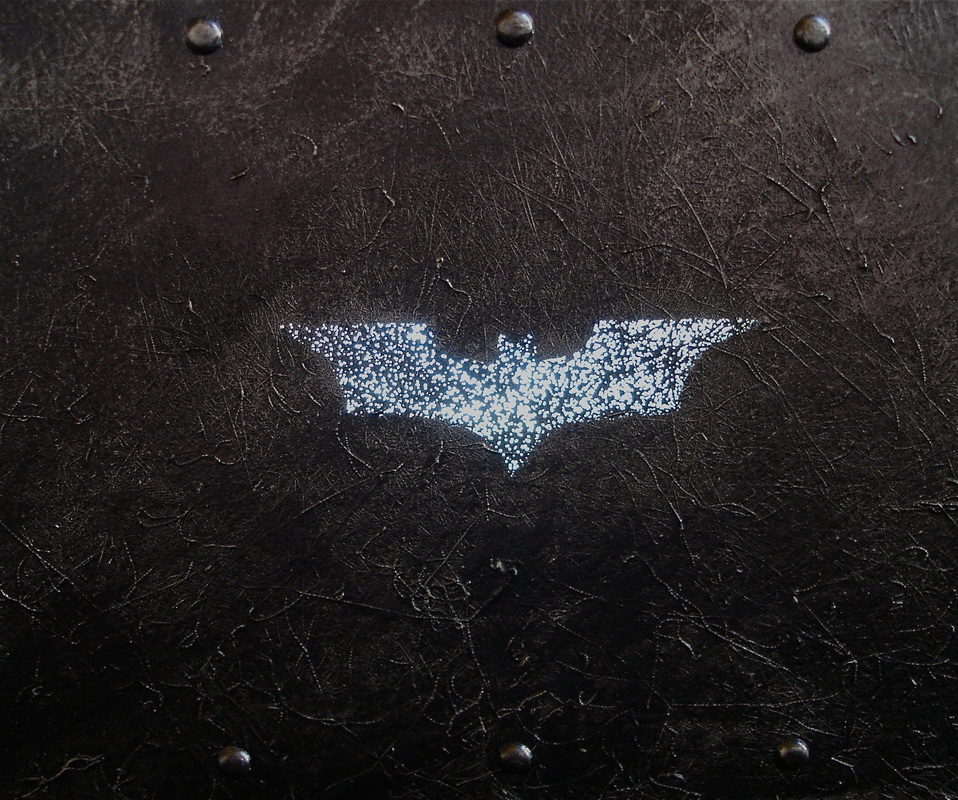 Carving this Bat symbol into the MDF box took an insane amount of time, as did getting the lighting behind it just right. I experimented a lot with different light sources, reflective surfaces, and light-diffusing materials. When laying down the textured film I had to be careful not to spread white glue over the aperture, as this would have created a solid surface. And then the paint would have covered it completely. 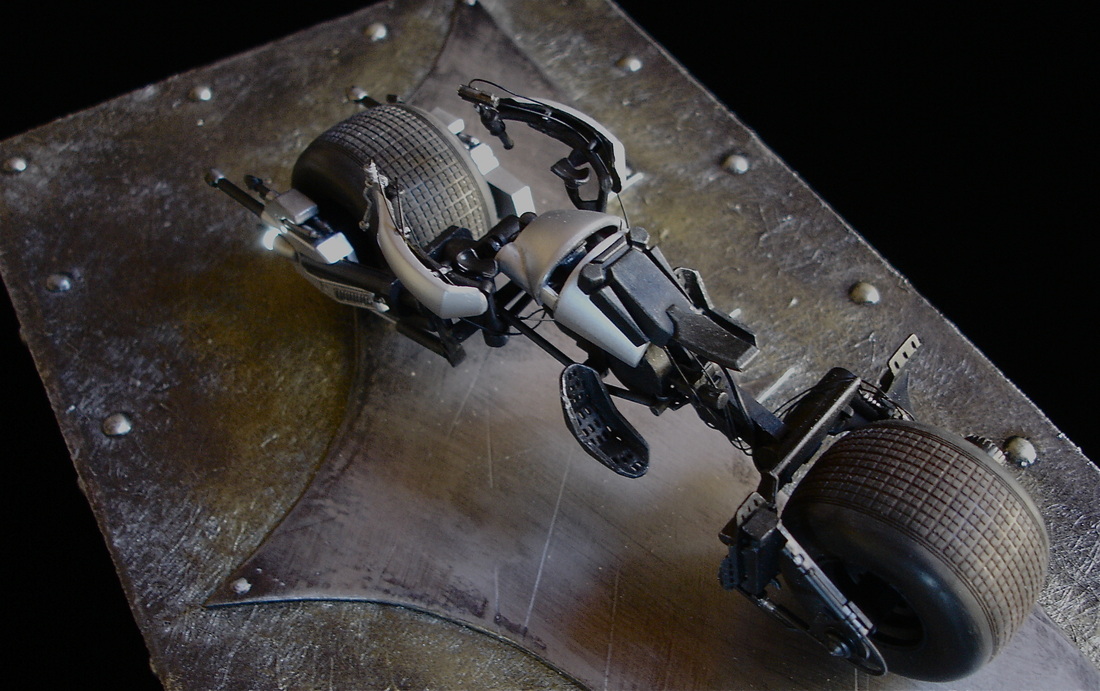 Adding the delicate strands of copper wire around the pod also caused much whinging and cursing, but it definitely adds interest and realism to the subject. Well, what's left of the functioning part of my brain thinks so... 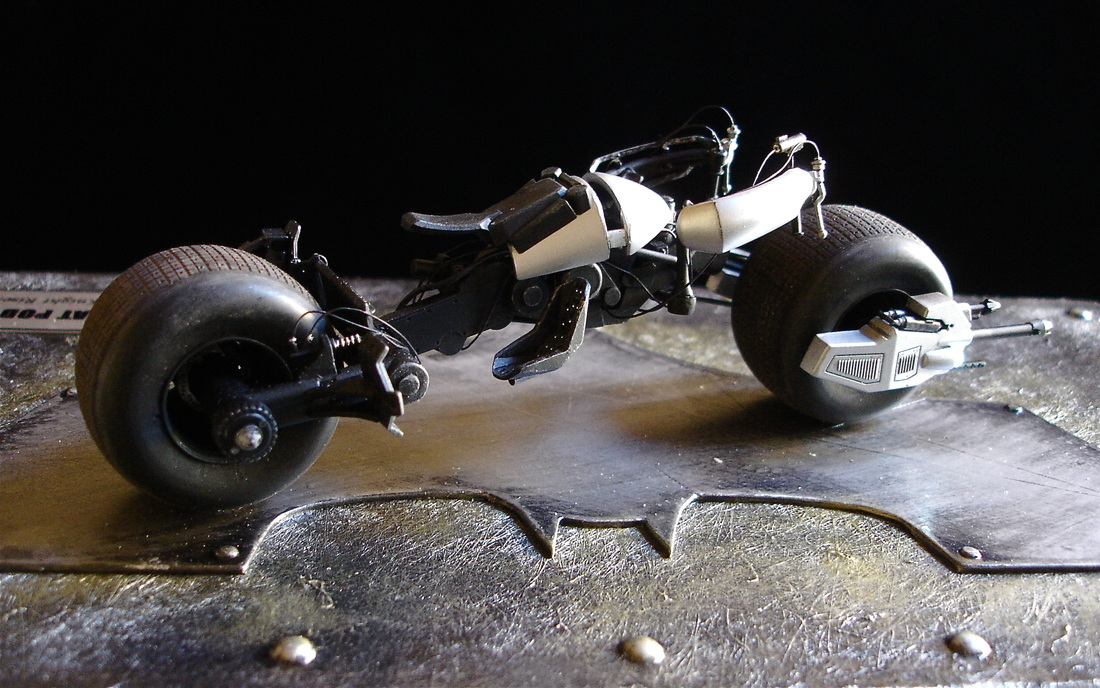 You can clearly see the 0.3mm fibre optic strand snaking out the back of that "targeting scope" and through the engine / chassis assembly. It terminates in the left-hand gun assembly where it picks up rearward light spill from the 1mm white LED headlamp. *Blah, blah, jargon, blah, blah!*