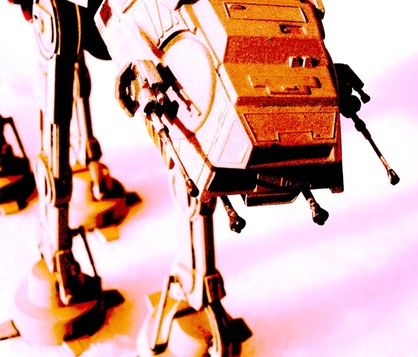 TSF Rating: * * *
I cannot recall exactly when I built this but believe it was around the same time as the AT-ST.  I remember wanting to try a mixture of colours instead of the straight-from-the-can Camouflage Grey again!  I'm pretty sure I used Light Ghost grey as it is a "cooler" shade of grey, then I gingerly dusted a layer of Flat White (Tamiya Spray bomb) over top to lighten it up.  While the finished colour is not movie accurate it certainly gave a frosty look which goes ideally with it's most noteworthy environment.
The cockpit is lit with a 3mm red LED (not shown currently).   I replaced the solid plastic windshield with clear sheet styrene and created a vague rear wall with hatch, then cut out two very minimalist silhouettes of the pilots and positioned them in front.  With the interior bathed in a dim red glow you can make out the "suggestion" of a cockpit without seeing the details, and it worked quite well.  Sticking with my standard M.O. I kept the circuit self contained.  A 3-volt button cell hides snugly in a rear foot and is easily accessed by a removable foot pad.  An on/off slide switch is mounted in the underside bulkhead concealed behind the overhanging armour plating mid-way along the flank. 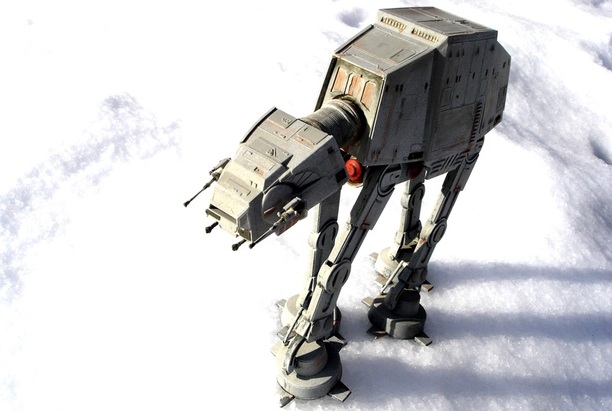 I have never been happy with this paint job. Very inconsistent weathering and non-existent pin washes annoy me, but not enough to put it back on the workbench. Perhaps one day,... when I have some spare time and no other models to build! 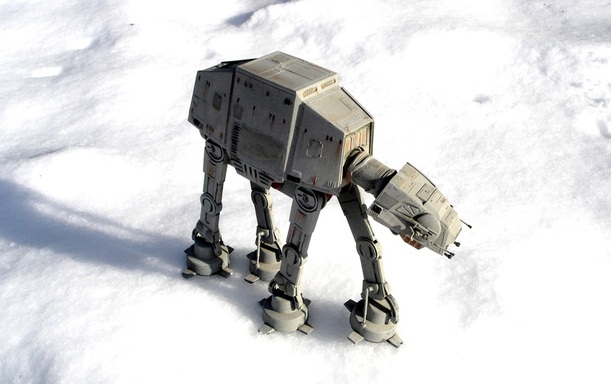 Real snow! I made use of an uncharacteristic snow storm and raced outside during spots of sunshine, camera and models in hand, and 'planting' and snapping shots. 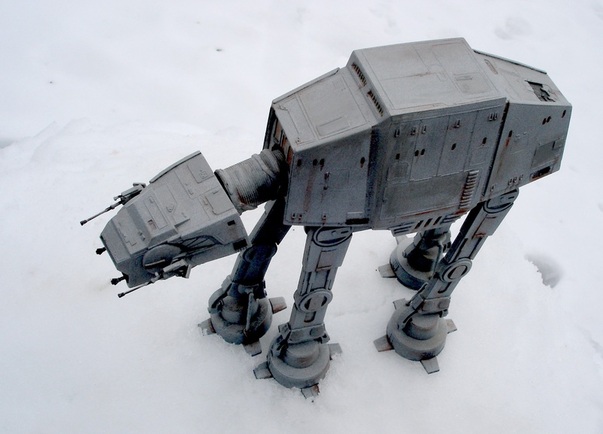 Looking sad and forlorn here! The kit-supplied rubberband, used to hold the moveable head and neck assemblies to the body, has slowly perished over the years, making the head become somewhat flacid and 'un-posable'. 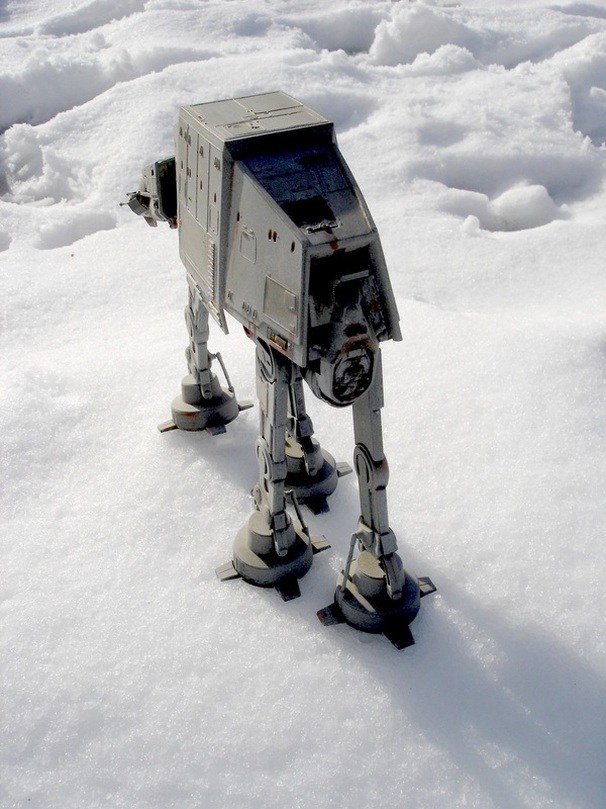 The AT-AT is a good kit from MPC, with lots of excellent detail. However, the trademark raised panel lines have duly undermined their efforts again. 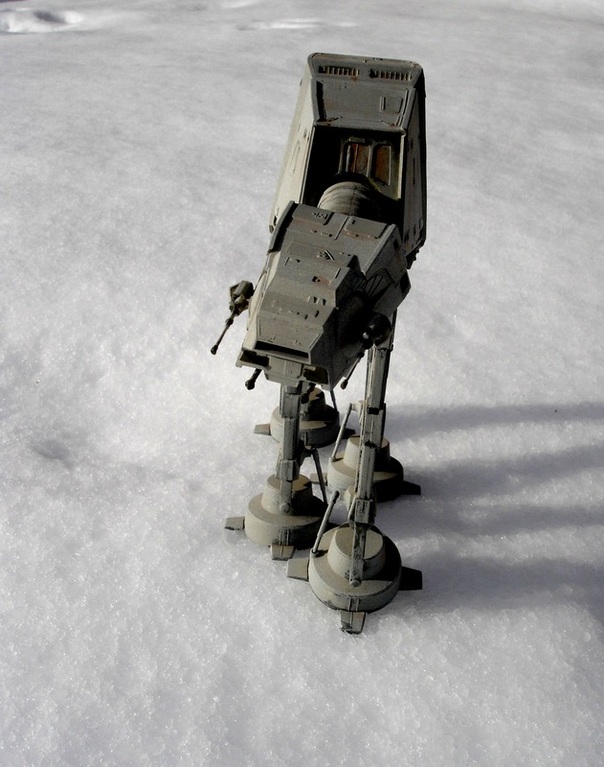 Hindsight, huh? If I was building one of these now I would have tried a lot harder to work those tricky seams, - like that glaring one along the 'neck'! 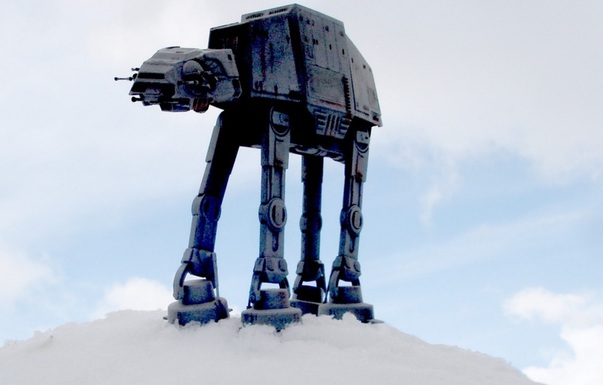 THE money shot! This slightly doctored photo looks almost like the real deal. This kit's scale has been cause for a lot of conjecture over the years, and I'm still not sure myself. If you have an opinion, let me know. 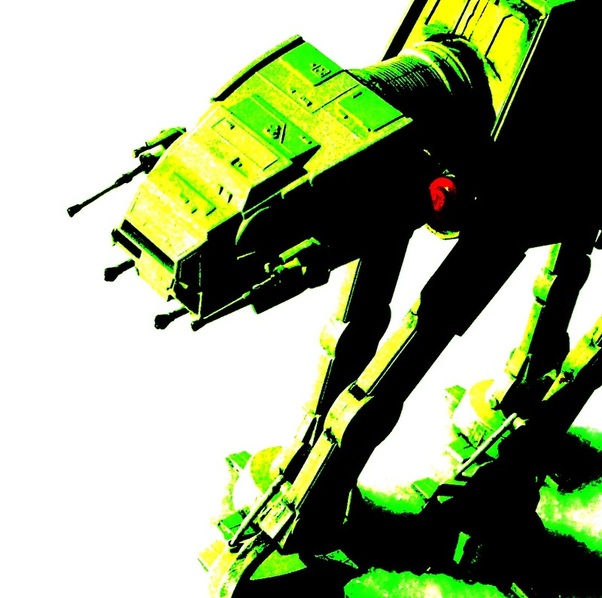 And that huge red nipple! What was I thinking!? 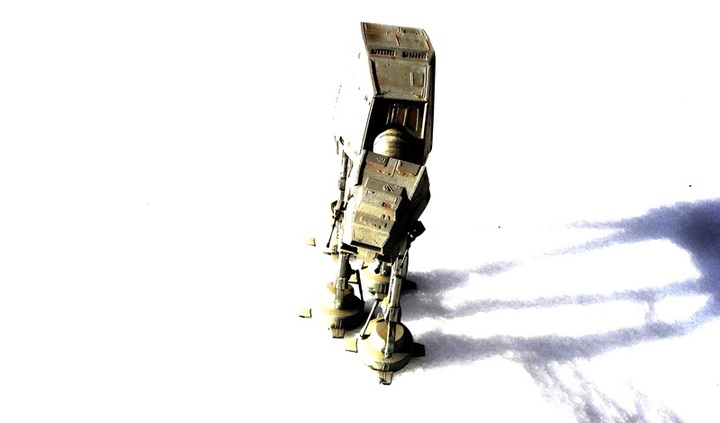 Pointless photos these last two, really, except that I like them.
***UPDATE October 2014***
And whaddaya know!?  That time has now come and I have actually revisited this mighty machine.  All new paint job, and a spiffy new display base,- stay tuned for pics!